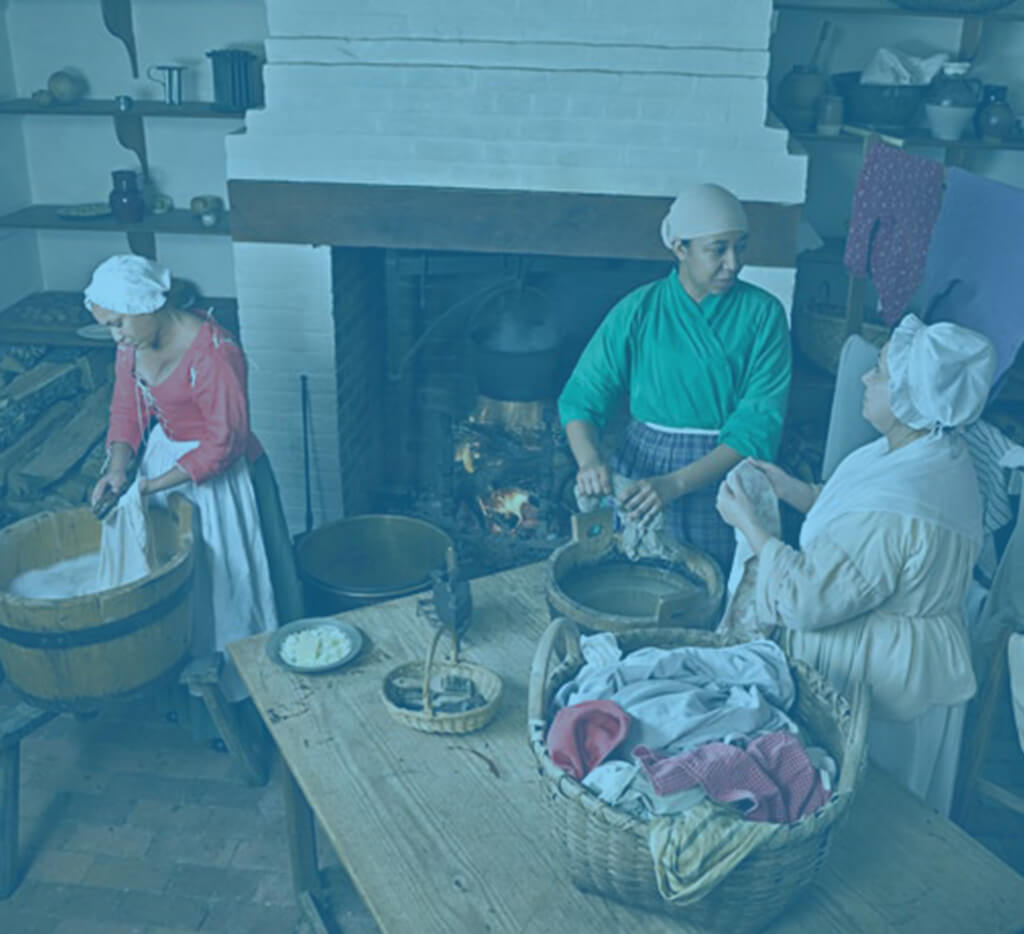 Who did laundry in the 18th century?

There’s no doubt that the 20th century featured the appearance of all sorts of devices designed to save time and perform tough tasks significantly faster.

The microwave is one easy example, since the appliance was and still is considered downright revolutionary in terms of being able to cook things in minutes instead of hours.

But fewer people think of another amazing time-saving appliance: the washing machine, which allowed housewives or servants to put soiled items in the appliance, turn it on, and move onto other tasks, rather than spending all day washing and wringing out the clothes by hand.

Washing and drying machines didn’t just appear out of the blue though – the history of laundry tells us that several generations of curious and innovative tinkerers looked for more efficient methods for cleaning clothes better and faster.

Essentially these ideas built upon each other until late 19th and early 20th century laundry engineers began combining the concepts into functional – and patentable – devices.

Of course, the washers and driers of today stand heads and shoulders above the appliances of even a century ago, so it’s exciting to think about what’s coming next, and how far we’ve come through the history of laundry machines.

Actually it was the ammonia in urine that can break up dirt and grit.

Smithsonian reported that the process started with people stopping to use the bathroom in a certain vessel outside the laundry area. When it was full an employee would dilute it with water and then pour the mixture over customer clothes, then another employee in a barrel of urine would stomp on everything.

A public laundry area called the washhouse was an important part of every city or village. Many areas also continued the use of human waste – called night soil or chamber lye -- on clothes because of the ammonia.

Clothing and linens were often boiled in big pots, walked on, and then stretched and laid flat to dry out. Regular fires in the washrooms also help speed up the drying process.

While the washroom model was common in larger cities, some communities did their washing near bodies of water. This involved putting them in a stream and soaking them and using a soap that includes animal fat and lye. A paddle also helped agitate the mass of clothes and squeeze out water.

Various tools made the process relatively easier, such as:

Early versions of washing machines as we know them started showing up in around the 1700s. Some of these 18th century laundry options including a patent for a spinning wooden drum filed in 1782 and a hand-powered scrubboard in 1792.

The first public viewing a laundry drum was seen in 1851, and primitive versions of wringers also began appearing around the 1860s, and then there was a horse powered drum that got people excited. Motors were added around the 1880s.

The first official patent for a full electric powered spinning and wringing machine was issued in 1908 for the Mighty Thor,

1. How long did it take to wash clothes before washing machines?

Depending on the population of an area, it could take hours or days for everyone to get cleaned up.

2. How did pioneers wash clothes?

They used a variety of tools and techniques to keep clothing safe and unsoiled. Often they were by a lake or stream which provided more water.

3. Do people still use washboards?

Yes! Outside of a unique tone for musical get-together, a washboard can still be utilized. The process is simple and some people like the slower pace. There could also be limited power or a social opportunity.

Get in touch with our sales team. We're here to help.

Get in touch with our support team. We're here to help.

Get in touch with our sales team. We're here to help.

Send us a message, we'd love to hear from you!